Sorry I've been a bit MIA again, actioned by my recent holiday to Croatia and Venice.

I had such an amazing time and wanted to share it with you.

Firstly we flew out to Croatia.  The flight from London was about 2hrs and we flew to a city called Pula.  Once in Pula we had a half hour drive to a town called Porec.

Porec is such a beautiful place.  Loads of people had told me how beautiful it was but I couldn't quite believe it when I saw it and it was even more beautiful than I even could have imagined.

The hotel we stayed in provided a free boat service that took us over to a small island called St Nikola where we had access to a beach which was both sand and stones. We spent a few days here just relaxing and enjoying the breath taking scenery and luxury yachts that sailed past.  It was complete bliss.

On the days in between we went on day trips to different islands.  One of the day trips was to a town called Rovinj.  We took a ferry over which took about an hour.  Rovinj has real history to it and we walked up along the cobble stones to the famous church Saint Euphemia's Basilica.  We went to the top of the church and had some wonderful views from the top.  We then went and had a coffee in one of the cafes before departing back on the ferry to Porec.

Another day we decided to hire a car to try and get round a few places at once.  We set out pretty early and drove to a town called Motovun.  This is another medieval town and home to both new and old churches.  We spent about an hour here taking in the scenery and enjoying a coffee before setting out to Fazana.  This was about an hour drive.  Once here we took a ferry over to the island of Brijuni which has a national park on it.  We had a guided tour round the island which I would definitely recommend and went on a safari ride seeing animals such as elephants and zebras!  I'd say this was probably my favourite part of the trip.  We had a quick dip in the Adriatic Sea because the water was so clear here we just couldn't resist!  Then we took the ferry back to Fazana, got back in the car and drove to our last destination of Pula main town.  In Pula was got to see one of the last surviving Roman arenas.  From the outside it looked very similar to the Colosseum in Rome.  However, on closer inspection and once inside I could see that it was actually much more well kept than the one in Rome and we again got to look around inside.

After this we were really tired so went into a nearby bakery for a Burek before heading back to Porec.  Burek is a famous Croatian delicacy and is basically fillo pastry filled with cheese or meat.  It is absolutely delicious and I am craving one so much I think I am going to attempt to make my own at home because unfortunately they don't sell them here in the UK :(

The last day trip we embarked on was to Venice.  Croatia is neighbour to Italy and where we were staying in Pula it is only a 2hr ferry ride to Venice so I was definitely interested in doing this.  We managed to get a discount of 50% also as we booked last minute so only paid about £25 for a return boat ride.  However, once in Venice we realised that it was a good job we did get a saving because it was really expensive here.

We only had about 5hrs in Venice so we didn't get time to do loads.  We had a look round the famous St Mark's Square piazza and at the famous St Mark's Basilica.  We didn't have time to go in though bcos the queue was just too big and we wanted to see other things. We walked over a lot of the bridges here and canals to get a glimpse of the famous gondolas.  These were so awesome!  I had previously read somewhere that they take this profession very seriously and you have to have been born in Venice to even train to be a gondola driver.  We then met up with some of our Italian friends who had travelled on the train from Milan to meet us.  They took us to a really nice restaurant just off St Mark's Square where we drank the traditional Italian drink of Spritz which is aperol and wine.  Yummy!  I then had a pasta dish which was soooooooo nice.  I do love Italian food so I was in a bit of a food coma after this!  We then finished it off with a traditional Italian dessert of biscotti dipped in wine.  Sadly our time had then run out in Venice and we said our goodbyes and departed on the ferry back to Croatia. 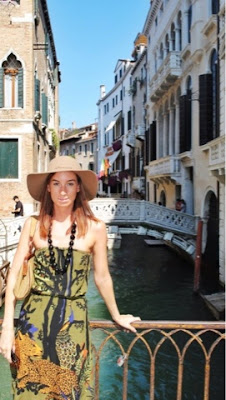 That just about concludes my trip.  I hope you found it interesting and I would definitely recommend Croatia a visit.