This weekend was different but fun!  I did a Clubbercise class Friday night and Saturday I went to a friend's for dinner.

For the Clubbercise class I wore a grey workout top from LA Gear (similar here) and blue tracksuit bottoms from Next (similar here) with my black Nike trainers.

On Saturday I opted for all black with black ripped skinny jeans and a black band t-shirt as we were just chilling at home.

The Clubbercise class I went to was really fun.  It's basically an aerobic style exercise class to club/dance music.  And the best part is they switch all the lights off and have disco lights going round AND you get given glowsticks to hold and wear.  So fun!!  I really worked up a sweat even though it didn't feel like I was working out at all.  For more information on classes visit their website here.

My friend and I found a recipe online that we wanted to try and we just adapted it a little.  We took a sweet potato and put it in the microwave for 5 minutes to soften it up.  Then we cut it in half topped it with pesto, tuna and cheese and put it in the oven until the cheese had melted.  We then placed them on a bed of rocket and spinach with some cherry tomatoes.  It was so yum!  For afters we had banana bread which just finished me off.  We had such a fun girlie evening, gossiping and indulging in our favourite foods. 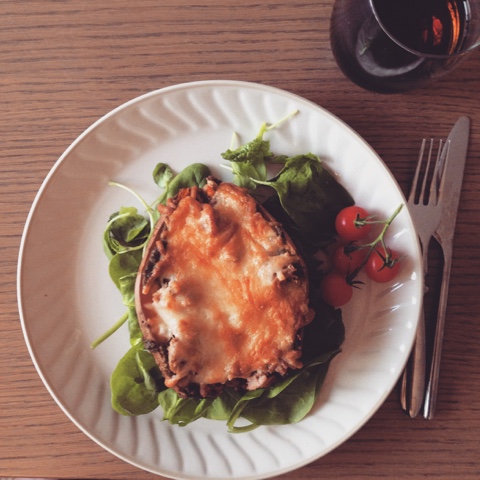 How was your weekend?